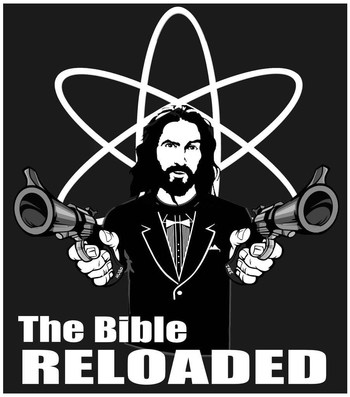 The Bible Reloaded is an internet series launched in 2012 by Hugo, later Hannah, and Jake. Hannah was raised Christian by her parents, but became an atheist after finishing high school, and Jake's never been religious, so they decided to start an internet series where they, as atheists, read and discuss the Bible and its stories, mostly in humorous ways. They also started doing Chick Tract readings when one of them found one in a truckstop bathroom stall and found it so bad that they found they could get some comedic mileage reading them and making fun of the values dissonance Jack Chick has on display in them from being an evangelical Christian writing them. They also have Ask Hugo and Jake Reads, segments similar to Jacksfilms' Jackask, where they comb their comment sections for comments to react to, mainly questions in Ask Hugo's case. They also do movie reviews where they react to Christian films, be them bad, or so bad, they're good.

she's been taking gender transition therapy for the previous several months, effectively outing herself as a trans woman and on November 18, 2019, she officially announced her name change to Hannah.

They rebranded the main channel as "Hugo and Jake" in late 2017, due to YouTube's demonetization policies towards their name; the "bible" being a religious word, and "reloaded" is associated with guns, as well as to let them do more than just religious content on their main channel, which they'd been wanting to do for a while. In December 2019, they again rebranded the channel as "Hannah and Jake" due to the aforementioned transition of Hugo to a Hannah few months before.

They've since started two more channels; The Quran Reloaded, where they do the same thing as The Bible Reloaded, only for Muslim-related content, and Unpopular Culture, where they talk about pop culture and do let's plays.

They have 3 channels on YouTube:The Bible Reloaded

, a channel on Dailymotion

, a channel on Vidme

In addition, both Hannah and Jake have their own YouTube channels, Hannah Reloaded

, in which they're dedicated to debunk and make fun of conspiracy theorists, alt-right individuals, and "anti-SJW" YouTubers.

Tropes featured in The Bible Reloaded: