"Egun on guztioi, Aitor Molina talking to you! Welcome to the… obligatory… Fantasia review" 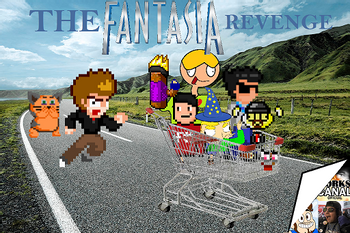 At least, it has better animation than Food Fight
Advertisement:

The 17th episode of Aitor Molina Vs. and the first animated collab. It's the 2015 Halloween special and technically The Halloween Revenge VI. It stars Aitor Molina leading a collaboration to review Fantasia. The guest reviewers are Workscanal

was made for the 2015 Red Ribbon Reviewers

This special is a canon part of the Revengeverse.

Doctor Pandemia is about to finish his last creation: Abelardo the invisible butler. His first mission is to avoid the organization of a classical music concert imposed by the city council giving the duty to the lookalike Aitor Molina. So the boy receives the order and uses it as an excuse not to finish The Dreamscape Kingdom.

Instead of a typical concert, Aitor reunites some reviewers to comment on the musical pieces from the Fantasia movie. Nobody goes to see the concert except Sir Pokon de Joy and Aitor is not having fun. Everything goes wrong, but Up to Eleven when Pandemia sends "an invisible ninja assassin" to interrump the concert. Reddy makes a literal appareance, the applauding machine breaks and Sir Pokon is expeled for "making too much noise".

Sir Pokon takes the staff with him to buy the place and Ganchito leaves Aitor alone to date the repaired applauding machine as Keygen. This leaves the boy surrounded by the killer in the shadows waiting to strike. Since nobody is watching at that point, Aitor tries to leave, but the assassin turns off the lights and tells him to finish before.

After all the reviews are played, the lights go out again and the killer reveals himself, just to fall and be crushed by a flashlight. Aitor recognizes him as Rakzol, the guy who tried to enter in the 2013 Halloween party (The Halloween Revenge IV/Infernals & Lemons) but Maiden Riku didn't let. Aitor takes a picture of Rakzol and sends it to the police, but Rakzol clones himself to fight.

To avoid the fight, Aitor makes Rakzol cry comparing him to a socially incompetent kid and changes his clothing with a clone. Rakzol!Aitor ties Aitor!Rakzol and tells the original one to finish him. Rakzol charges a weak punch and defeats his disguised clone, which becomes a ninja log. That makes the other Rakzols questioning their existence and Aitor tries to escape.

Rakzol throws his "logged" clone to Aitor and stops him. While concentrating an energy blast, the ninja pushed back himself and also "logs". Aitor disguises again and Rakzol uses his pinkeye technique to detect the fake clone. One of the three Rakzols logs and the analyzer becames a giant eyeball because he didn't know how to stop the pinkeye.

There are only two Rakzols left, so Aitor reveals himself and makes Original!Rakzol to surrender before striking him with Hammer Smith. The ninja gets catapulted by Pandemia and Aitor finishes the overall review. When he's about to go, Sir Pokon returns and has bought the establishment. As Aitor's new boss, he orders to repeat the concert.

After the credits, Rakzol falls in his house and his friends convince him to stop pretending being a professional assassin.