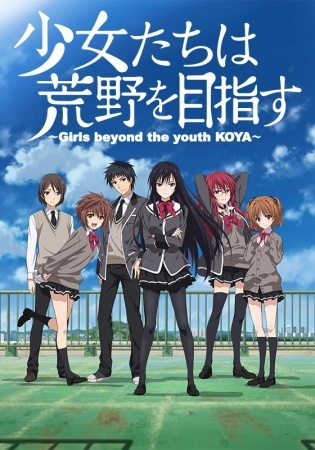 Buntarou Hojo is your typical Ordinary High-School Student with a knack for writing scripts for the drama club. One day he is approached by Sayuki Kuroda, president of the Marketing Research Club, who proposes that they make a Dating Sim. Together with some of his friends and fellow students, they set out to create their first game.

Created by Minato-Soft, the creators behind Maji de Watashi ni Koi Shinasai!, Shoujotachi Wa Kouya O Mezasu, also known as both Girls from Beyond the Wasteland and Girls Beyond the Youth Koya, was released as an Anime First, airing as part of the Winter 2016 Anime lineup. A Visual Novel is scheduled to be released on March 25, 2016.

Compare with How to Raise a Boring Girlfriend, which shares similar themes with this show, albeit at a much faster pace.