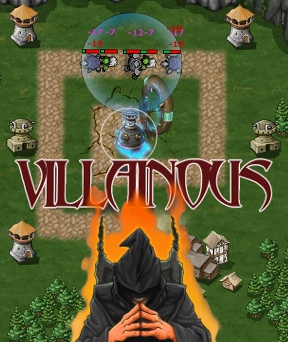 Villainous is a 2011 2D Anti-Tower Defense game made by Cellar Door Games, which also brought you games such as Don't Shit Your Pants and I Have One Day.
Advertisement:

As the name of the game may tip you off, Villainous goes against Tower Defense standards by making you the villain who sends the waves of monsters. In other words, you are an evil mage in control of a growing army of evil forces that are out to raid regions, take over kingdoms, and in the end, Take Over the World. During your journey of conquest, with each attack (successful or not), you gain infamy, which can be put into upgrading various aspects of your army. To be more precise, you can unlock new unit types, learn new spells, upgrade the statistics of the former two, and contemplate specific summoning strategies to overcome the defenses of your foes.

As for the specifics of each raid (or level), you must organize and pick your monsters of choice, to combat the specific placement and type of towers. In the end though, your goal is to survive as many waves as possible, which is MUCH easier said than done, as towers get stronger with each subsequent wave - making monster placement ever more crucial. Thankfully, three spells are at your disposal to combat the difficulty, as well as a somewhat long Tech Tree. Be warned though, the towers' strength and tactics upgrade themselves the further you progress...

Overall though, a nice twist to the usual Tower Defense games. It can be played here

Not to be confused with the Cartoon Network series of the same name.