As this is a Tear Jerker page, spoilers will be left unmarked. You Have Been Warned! 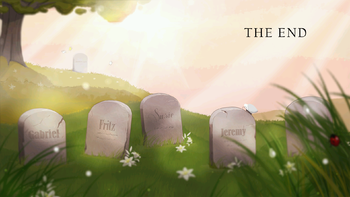 "For most of you, I believe that there is peace, and perhaps more, waiting for you when the smoke clears."

This place will not be remembered, and the memory of everything that started this can finally begin to fade away, as the agony of every tragedy should.
—Henry