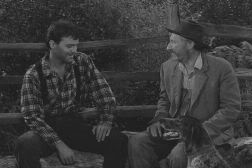 I'm not going without Rip.

Rod Serling: An old man and a hound dog named Rip, off for an evening's pleasure in quest of raccoon. Usually, these evenings end with one tired old man, one battle-scarred hound dog and one or more extremely dead raccoons, but as you may suspect, that will not be the case tonight. These hunters won't be coming home from the hill. They're headed for the backwoods of the Twilight Zone.

Hyder Simpson brings in wood for his wife Rachel and insists that his dog Rip come in with him, because the dog once saved his life. They sit down to supper and Hyder says he and Rip plan to go coon hunting. Rachel warns him not to, saying that she's seen several bad omens. Hyder disregards her warning and heads out that night. Rip goes after a coon and follows it into a lake with Hyder in hot pursuit. Rip doesn't come up and Hyder leaps in to save his beloved dog.

Come daybreak, Hyder wakes up by the side of the lake with Rip but no memory of what happened. As he's heading home, he passes Wesley and Tillman Miller as they dig a grave on his land. They ignore him and once he realizes they're burying a dog, he figures they're being silent out of respect. Hyder arrives home to find Rachel dressed in black. She ignores him and Rip and talks to Reverend Wood, who offers his condolences on Hyder's death. Rachel talks about how she asked Hyder not to go hunting a month ago but he ignored her warnings. Hyder looks on as the men come to take his coffin out and carry it to the graveyard.

Hyder follows them and comes across a fence he's never seen. He and Rip head down the road parallel to the fence and finally come to a gatehouse. The gatekeeper comes out and starts taking Hyder's information and asks how he died. Hyder insists he's alive but the Gatekeeper has him think back and Hyder finally realizes that he died. He looks down the road on the other side of the gate and the Gatekeeper describes Heaven. Rip starts to bark at the gate and Hyder wonders why he doesn't hear a heavenly choir. The Gatekeeper says he doesn't hear anything because he's on the outside and insists that he come in. However, when Hyder brings in Rip the Gatekeeper informs him that dogs aren't allowed in this heaven. There's a dog heaven down the road and the Gatekeeper promises to deliver Rip there. Hyder refuses to enter, insisting that if it's too fancy for Rip then it's too fancy for him. The Gatekeeper offers to break the rules and slip Rip through the fence to Hyder later, but Hyder insists on going through the front gate with his dog. The Gatekeeper offers to hold Rip while Hyder looks around and sees if he likes it, but Rip barks at the Gatekeeper and Hyder wonders how he'll coon hunt without Rip. The Gatekeeper informs him that coon hunting isn't allowed in Heaven, which decides Hyder, who heads down the road despite the Gatekeeper's warning that the road goes on to Eternity.

Hyder continues a bit down the road then sits down. He figures that Heaven must be filled with city folk if they don't allow coon hunting, but he plans to stay with Rip. He sees a young man approach. The man is the Messenger and says he's been sent to find Hyder and Rip. The first gate goes to Hell, and the Devil always tries right up to the last minute to get someone in his clutches. They don't allow dogs because they can smell the brimstone. They head down the road to a plain simple opening and the Messenger assures him there's coon hunting and square dancing in Heaven. The Messenger assures him that Rachel will be along directly and won't have any trouble with the Gatekeeper.

Rod Serling: Travelers to unknown regions would be well-advised to take along the family dog. He could just save you from entering the wrong gate. At least, it happened that way once in a mountainous area of the Twilight Zone.