Recap / Tangled: The Series S1E04 "Challenge of the Brave" 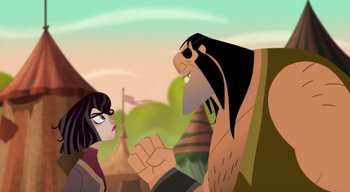 "You're knot going to win this challenge. It's a thinker."
Rapunzel: Wait, stop, we're supposed to be friends.
Cassandra: A friend wouldn't be so oblivious, Rapunzel.
Advertisement:

Cassandra trains for the Challenge of the Brave competition being held in the kingdom where the fiercest of warriors compete for glory and respect. She is taken off-guard when Rapunzel decides to compete as well despite being the princess, so Cassandra lies to her about needing an invite to compete. When Eugene reveals that anyone can sign up, Rapunzel seizes the opportunity, much to Cassandra's shock. Cassandra's jealousy rises when Rapunzel manages to actually take the lead in the contest.