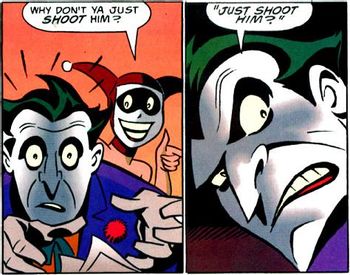 Where's the fun in that?
One-Armed Man: I've been looking for you for 8 months. Whenever I should have had a gun in my right hand, I thought of you. Now I find you in exactly the position that suits me. I had lots of time to learn to shoot with my left.
(Tuco kills him with the gun he has hidden in the foam of his bubble bath)
Tuco: When you have to shoot, shoot. Don't talk.
— The Good, the Bad and the Ugly
Advertisement:

Villains frequently find themselves in conundrums that could easily be solved by finding the right person and putting a bullet in the offender's head. But for whatever reason, the villain continues to refrain from doing so.

Compare Third Act Stupidity, Contractual Genre Blindness and Kill Him Already! (when the good guys are urging a quick kill). Someone might invoke this trope by using a Scheherezade Gambit. Contrast Combat Pragmatist and No-Nonsense Nemesis. Not to be confused with Just Eat Gilligan, although there can be overlap. Also contrast Once is Not Enough when the hero KO's the villain and then chooses to flee instead of finishing him off.