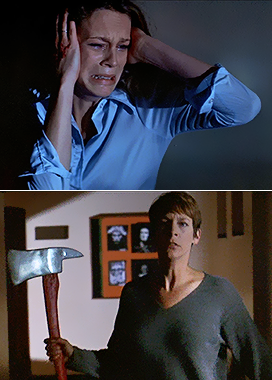 From Damsel in Distress to Action Girl. A lot can change in twenty years.
"You have the opportunity, here and now, to choose. To become something greater and nobler, and more difficult than what you were before. The universe does not offer such chances often, G'kar."
— Nameless Narn, Babylon 5, "Dust to Dust"
Advertisement:

Character Development is, by definition, the change in characterization of a Dynamic Character, who changes over the course of a narrative. At its core, it shows a character changing. Most narrative fiction in any media will feature some display of this.

There are many sub-tropes that take place due to this trope, some of which include:

These are hardly the only examples. The Evil Twin of Character Development is Character Derailment. Beware this trope. To see the opposite of this trope, see Static Character. See also Flat Character and Rounded Character. Compare Hidden Depths, where something is revealed that was true all along, but would not have been visible before.