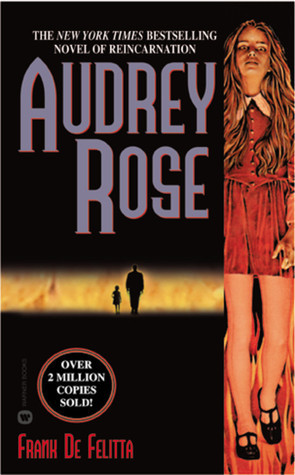 Audrey Rose is a 1975 horror novel by Frank De Felitta.

New Yorkers Bill and Janice Templeton seem to have the perfect life. They live in a gorgeous apartment building that still resembles the artists' colony it once was, Bill is becoming a major player at his corporate job, their sex life is amazing, and they eat at all the best restaurants in town. Best of all is their daughter Ivy: a charming and vivacious girl who is their pride and joy. But their perfect life begins to fall apart when a mysterious stalker enters their lives. This seemingly-disturbed man, Elliot Hoover, not only has a frightening obsession with their daughter, but he also claims that young Ivy may in fact be a lost and tormented soul trapped in a new body.

Was adapted into a 1977 film directed by Robert Wise, starring Marsha Mason as Janice, John Beck as Bill, Susan Swift as Ivy, and Anthony Hopkins as Hoover. A sequel novel by De Felitta, For Love of Audrey Rose, was published in 1982.