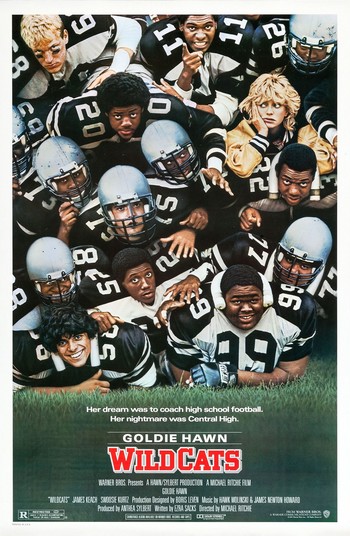 It's the sport of kings
Better than diamond rings
Football

Wildcats is a 1986 comedy film directed by Michael Ritchie, starring Goldie Hawn and costarring Jan Hooks and Swoosie Kurtz. It also features LL Cool J and is the film debut of Wesley Snipes and Woody Harrelson.

Molly McGrath (Hawn) is the daughter of a famed football coach who's dying to head her own team. Molly leaves her job coaching girls' track at an affluent high school after she gets passed over for the position of football coach. The reasons being that she is a woman, even though her father taught her his brilliant football tactics and she knows the game far better than the man they hired. In frustration she accepts an offer to take over a football team at Central High School, a Chicago inner-city high school.

At first the new coach’s idealism and optimism are suffocated with racial and gender prejudice, but eventually her overriding spirit begins to whip her unruly team into shape. At the same time, she must also struggle to win a battle for the custody of her two young daughters. The real test for Molly comes when Central High team faces her old school in the city championship.