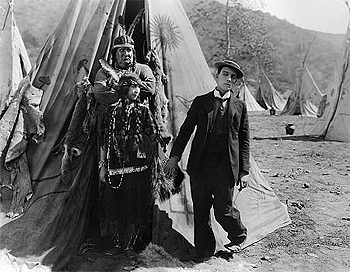 "Kill first white man that comes in that gate."
— title card immediately before the entrance of Guess Who
Advertisement:

In this 1921 short, lepidopterist Buster Keaton is inducted into an Indian tribe and saves their land from the corrupt oilmen who stole their lease.

Not to be confused with the 1948 Bob Hope movie of the same name.

The Paleface can be seen at Google Video.

The Paleface contains examples of: