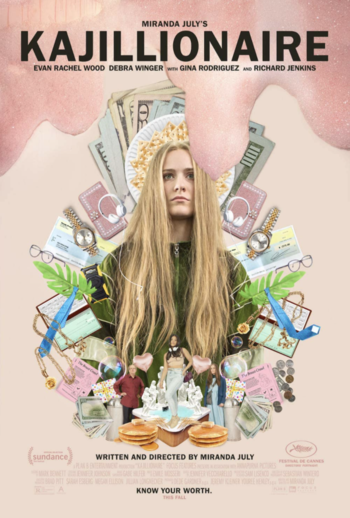 Know your worth.
"Life is nothing. Just let it go without really thinking about it."
—Old Dolio
Advertisement:

Kajillionaire is a 2020 indie crime-dramedy written and directed by Miranda July (Me and You and Everyone We Know). It stars Evan Rachel Wood as Old Dolio, a 26-year-old woman who lives with her parents and knows nothing but the art of swindling. On an airline refund scam to secure enough money for their long overdue rent, the family encounters a talkative young woman who might be the key to a series of thefts with high economic reward.

The film also stars Debra Winger, Richard Jenkins, and Gina Rodriguez. It premiered at Sundance before seeing a wide release through Focus Features later in the year.