Fanfic / The Little Lock That Could 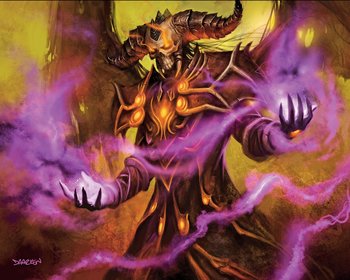 The Little Lock That Could

, written by Robert Welsh a.k.a. Warg

◊, is an interactive World of Warcraft fanfiction published on fiction.live

The story follows a young warlock, Aldwyn Nightingale, and his adventures in the world of Azeroth in which he works to master his craft and find his purpose as a warlock.

Aldwyn has a strong impact upon the world and its denizens, changing the fates of several characters and disturbing the balance between the Alliance and the Horde.

The Little Lock That Could is, at its core, a coming of age story, Aldwyn leaving his home in Duskwood as a naive, inexperienced and immature child with several flaws that negatively affect his interactions with others, such as his pride and his anger when he is underestimated or called a child. As the story progresses Aldwyn faces several trials and tribulations which lead him to gaining knowledge, experience, tempering his emotions, reaching a state of making mature responses and decisions and, most importantly, improving his social skills... at least a little.

The quest started on the first of June, 2019 and has been and presumably will continue to be irregularly updated by its author, who, after attempting and failing to make two other quests, promised he will continue writing until its completion. Warg seems to have made good on his promise, The Little Lock That Could reaching almost four hundred thousand words, recently finishing the first part of the story which takes place in "Classic" or "Vanilla" World of Warcraft and will soon continue in the Burning Crusade expansion.

The quest has a large (for the site) following who has been described as "cancerous", "exceptional" and "a pack of rabid hyenas". The author seems happy with the behavior of his readers, despite cliaming several times that he has not cultivated the chat, and being unable to see that the readers only mimic his behavior.

The quest has officially ended, with the last post being on Feb 10 2020, soon after reaching its second part, Burning Crusade, and there will be no more further updates.

As of April 17th, a Friday, the quest is... not, anymore. Warg quit and deleted it all. A mirror may be posted if one is found. Otherwise, it is no more. Here is a mirror of all his major stuff

Twist, it's back, as of 22th September. Kas-restored, after warg came back and kinda regretted deleting all of his stuff. Might not run again, might run again, but at least you can view it the way it was meant to, even checking out the past chat.

The Little Lock That Could contains examples of: