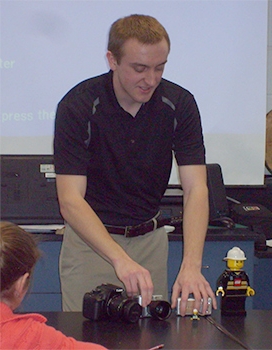 Hickox shows students at Cardinal Middle School in Middlefield, Ohio, how he makes his videos.
"Next to the creators of The LEGO Movie, Michael Hickox may just be the best LEGO movie maker of all time."
—Colleen Pence, as written in this December 2013 article

An Ohio-based creator of short YouTube videos, mostly Brickfilms. Hickox has been making these particular videos since way before everything was awesome.

in 2007. This account contained a mix of videos, ranging from live action, to computer animation, to his first Lego stop motion videos. It was the Lego videos that got the most views, and so, in 2009, Hickox created his current YouTube account

, with the hopes of becoming a YouTube Partner, a goal he met in February 2012. This account is exclusively Lego stop motion videos.

As of June 1, 2018, Hickox's current account has over 1.1 million subscribers, and those videos have over 822 million combined views. Many of the Lego videos on his current account have view counts that are in the eight-figure range. His old account, which he hasn't uploaded a video to since leaving it behind in 2009, has over 24,000 subscribersnote The subscriber count on that channel has actually gone up over the years., and all of those videos have over 56 million combined views.

So popular are Hickox's Lego videos, that he was approached to make a promotional video for the DVD and Blu-Ray release of The LEGO Movie in the Summer of 2014, doing so in his own unique style. Here is the finished product.

In October 2014, Hickox announced a new series called Tim & Ralph, which centers around the adventures of two best friends. The series' fourth season premiered in July of 2018 after a two-year hiatus. Each season contains five episodes.

Despite his popularity, Hickox still considers making these videos his hobby. He is a student at the University of Akron, where he is studying to become a mechanical engineer.