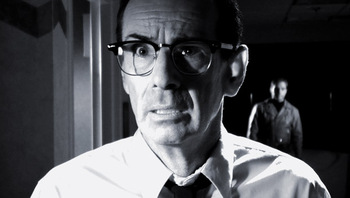 A wiry government office worker who spends his days trying to avoid helping even a single customer, Edward becomes caught in the nefarious plans of the Mercury Men and tries anything in his power to escape. His life of monotonous paperwork is quickly replaced by a grand intergalatic conflict when he is called on to help outwit the cunning creatures.
Advertisement:

Mark's previous credits include The Road, George A. Romero's Day of the Dead (1985), Creepshow, and the Captain Blasto web series. He also appears in our own webshow, Echo Chamber as Zack's dad.

Daring League captain, aerospace engineer, and former US Air Force pilot, Jack travels the galaxy to explore unknown worlds, new alien races, and advanced technological wonders. Always at Jack's side is the Lumiére, his trusted revolver which fires bolts of condensed light. Jack is dispatched to Earth to investigate the glowing men of Mercury. 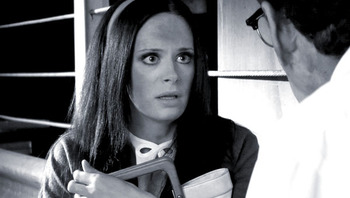 While trying to get a simple government form stamped before the municipal offices close for the night, Grace is confronted by an immovable object: Edward Borman. The young raven-haired woman inadvertently becomes trapped by the Mercury Men with Edward as her only help to escape.

The titular Mercury Men, the Mercurians are the film's primary antagonists. According to Jack, the Mercury Men took the Apollo moon landings as a threat, as it was a greater technological achievement than anything the Mercurians (who are millions of years older than humanity) had ever accomplished.