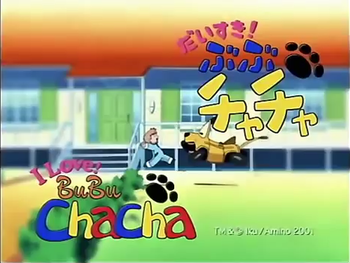 A boy and his dog... car
Advertisement:

Set in Greenhill Town (heavily implied to be in America), ChaCha was a dog belonging to Buddy (real name Randy Rand), a curious preschooler. One day, Buddy wandered out to the streets and into the path of an oncoming car. ChaCha, seeing Buddy in danger, rushed out to save him, but sacrificed his life while doing so. Later that night, ChaCha was somehow reincarnated into a ride-on toy car, and that marks the start of the series, which takes a sharp shift towards slice-of-life (weird supernatural tones not withstanding). Additionally, more vehicle-animals were introduced into the series.

The series is as strange as it sounds, but it did gather a large enough fanbase to warrant a second season. The show has an English dub, as well as dubs for several other locales. Additionally, it even spawned a kiddie ride (complete with Chinese knock off of said ride).