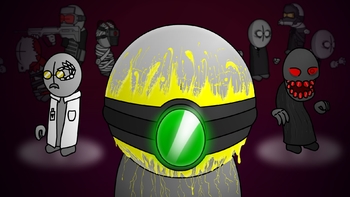 The series stars Kelzad's Original Character, Kelzad, and Yeelon Mekyr, two Super Soldiers being developed in an A.A.H.W. facility. After a mysterious explosion from Yeelon's tube frees both of them, the two work to escape the facility they are in.

However, by the end of the first episode, Project 00X, the status quo completely changes and Kelzad eventually ends up teaming up with Zalmamdar to oppose a corrupted Yeelon.

REALM is particularly notable among other Madness Combat fan series for its great animation, interesting plot that not only adds a bit of lore to the Madness Combat series but also seemingly takes place in the same main series, and stellar soundtrack.