Please note that this page and the Game Mod it covers contain MAJOR spoilers for Doki Doki Literature Club! If you have not played that game, it is strongly recommended that you do so before reading this page or playing the mod, as doing either first is very likely to ruin your experience. 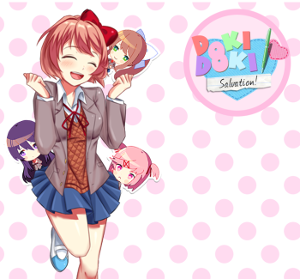 Salvation is subjective. It really just depends on your circumstances in life.
When a reality is taken away from you, you're thrown into an endless abyss of pain,
suffering, and horror...
Your body tends to take over and switch to survival mode, all in attempts to break
free its torture prison.
So... in a way... this outcome was MY salvation. As I'm sure it was yours.
Thank you for making the Literatur Club an amazing place. I'll keep you tucked away
in my heart, always.
Advertisement:

Doki Doki Salvation is a fan-made Game Mod of Doki Doki Literature Club! conceived by 12Gizguy6 as a goodbye to the DDLC community. It begins with Monika finding herself unable to delete characters, and the main character finding Sayori about to hang herself and talking her down from it. Things proceed from there as the main character arranges help for his friends.

The mod focuses heavily on Sayori, who eventually becomes the Main Character's girlfriend.

This mod contains examples of the following tropes: