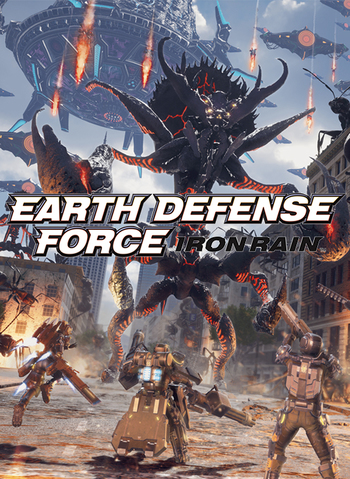 The year is 2028. A giant alien ship called the "Hivecraft" appears in Earth, flying across all major continents in the span of three days, dropping monstrous, insect-like creatures and deadly, highly-advanced weaponry in its wake. Major population centers are abandoned and reduced to ruins in a manner of months; major military bases worldwide are destroyed; and though a new military organization (dubbed the "Earth Defense Force" is created in response, it ultimately seems that nothing can be done, and humanity waits and watches the end of history unfold before their eyes.

2032. A groundbreaking technology is created, the "PA-Gear." Exo-suits deriving power from the mysterious minerals that are inside the aliens and their technology, they finally give humanity the edge they need to push back against the aggressors, slowly taking back their planet with teams of small, but devastating forces of EDF soldiers. The alien's expansion is stopped, humanity reforms society around this new paradigm.

2033. With the help of a brand new, still-experimental "Type-S" power core and PA-Gears for their ace soldiers, the EDF stages an all-out assault at the Hivecraft. Their overwhelming numbers and skills completely demolish the Hivecraft, but the victory is not without its costs: half of the already tiny EDF forces are killed, and the experimental cores end up completely lost. Worst still, the insect-like monsters it dropped remain.

2040. Without the guidance of the Hivecraft, the giant insects breed uncontrollably, turning the ruins of cities into their massive hive complexes. Outnumbered and exhausted, EDF falls, and only surviving patches of assorted military units survive. In the remnants of central headquarters, they plan, prepare, and strike out in the insect-infested wastes, trying to help humanity survive another day in a world ruled by giant insects.

Such is the plot of Earth Defense Force: Iron Rain, another spinoff to the Earth Defense Force series. The core gameplay of "shoot giant bugs with various, increasingly ridiculous weapons" is the same but there are numerous changes to the mechanics. By far the most obvious is that the class system has been replaced, all weapons able to be used by all characters, with PA-Gears deciding mobility options and special abilities. Among the base four:

Other changes include an "Overdrive" mode, a once-per-mission power-up that grants them unlimited energy, vastly increased firepower, or becoming effectively invincible, among other benefits. The weapon acquisition/upgrade system has also been vastly streamlined, now requiring investment of resources and currency rather than finding them as random drops.