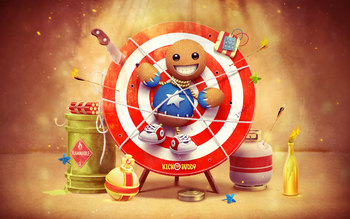 Kick the Buddy (also known as Interactive Buddy) is a Casual Game created by Chill Fleet (one of the alias used by game developer Playgendarynote Due to limits on number of apps allowed to be published per Apple Store account, Playgendary created the 'Chill Fleet' account to publish the 'Kick the Buddy' game.) about torturing and beating up a rag doll named Buddy.