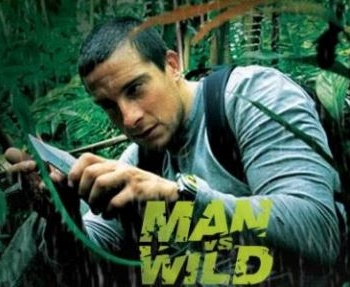 Man vs. Wild is a Discovery Channel show in which famed survivalist Bear Grylls (actually a nickname; his real name is Edward), runs the audience through techniques and strategies to keep yourself alive when lost and lonely in the wilderness. The show ran from 2006 to 2011.

He visits many many different areas to get the point across, including Zambia, Alaska, the Amazon, the Florida Everglades, and so on and so forth. The point, of course, is that eating bugs is good.

Bear Grylls is perhaps most famous for his strange habit of eating any of the local wildlife small enough (and some that even aren't) to fit in his mouth. After eating a Zambian grub, he proudly proclaimed that it was "like having your friends put their bogeys together and slip it into a sausage. And then put it into your mouth." Brave man, Bear Grylls.

The series took some flak for orchestrating several of the "natural" or "random" happenings, and for implying that the main character roughs it for the duration of the show, while he has on occasion stayed in a hotel. Some of the more egregious offenses include Bear taming "wild" horses (actually trained horses brought in for the show) and having a crew member in a bear costume "attack" his campsite. The show has since opened each episode with a disclaimer to explain that not everything shown actually happened as depicted. Furthermore, starting around mid-Season 4, Bear & crew have pretty much given up on hiding scripted events and signs of civilization.

The series is also compared to Survivorman and both were once considered Dueling Shows... which is odd because they were both on Discovery Channel, and new episodes of one were usually only shown during the off-season of the other.

Starting around Season 4, the producers took a looser interpretation to "wilderness survival" and stopped masking or editing out train tracks, villages, landmarks, and other evidence of human civilization. There's even a Season 5 episode filmed in an abandoned city of Eastern Europe. Meet Bear Grylls: World Adventurer!

The show also got a spin-off on Netflix named You vs. Wild, a Choose Your Own Adventure-style interactive series.

Alternative Title(s): Man Vs Wild, You Vs Wild