Series / Are You Smarter Than a 5th Grader? 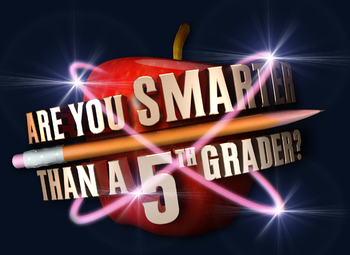 Are You Smarter Than a Fifth Grader?
Grab a pencil and a piece of paper
Teacher, teacher now we’re back in school
So are you smart enough for the fifth grade?
Advertisement:

Game Show created for FOX hosted by comedian Jeff Foxworthy in which contestants test their wits on common school-related topics (geography, spelling, math, etc.) against a panel of fifth graders for a chance at $1,000,000. It has the typical 21st-Century game show Tropes of a money tree, pseudo-lifelines to help with the questions, and a loud audience, but it's a surprisingly good watch, and free of the pop-culture questions commonly found in trivia shows. The show first aired in an hour-long format for three seasons between 2006 and 2009. (There were many complaints from actual college students who insisted they never learned this stuff, most likely due to the subject material having been changed since they moved on from 5th Grade.)

In September 2009, the hour-long show ended and a half-hour syndicated version replaced it, with a top prize of $250,000. The syndicated version featured a slightly different format: each category was worth a dollar amount based off its level, winnings went to a bank (which got reset to $0 if a player answered a question incorrectly), and the player could opt to play a bonus question to increase their winnings tenfold. This version was canned in March 2011.

In November 2014, FOX announced that it was reviving 5th Grader, with its revival premiering on May 26, 2015; it's relatively unchanged, aside from an updated look and the ability for the contestant to win $10,000 for another school as well. Oh, and the $1,000,000 question is now at sixth grade level, so you really have to be smarter than a 5th Grader to win.

Another revival was announced by Nickelodeon for 2019 and aired in the same year. It was hosted by John Cena. Its top prize was $100,000, due to Nick being a cable network. This version's main game only contained first to fourth-grade questions; the fifth-grade ones were reserved for the bonus round. A wrong answer in any round merely kept the player's money intact and removed the highest amount available in that round's money ladder.