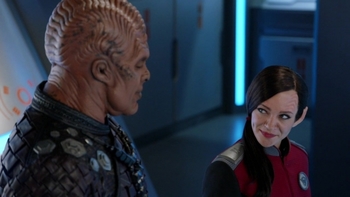 For those who still miss Alara, fear not - Talla also has bad romantic luck.
A Moclan engineer comes on-board to test a new deflector system. An engineer who happens to be Bortus's ex-boyfriend. But his eyes are drawn to someone else.