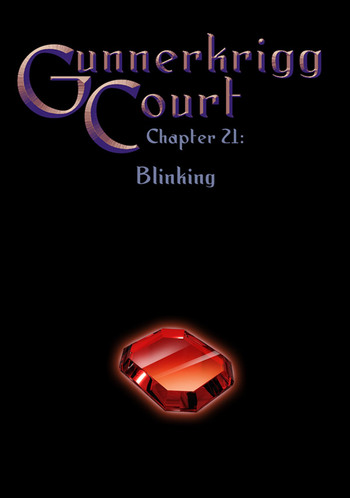 Kat's received a delivery at her workshop, and asks the attending robots to set it down in the corner. Kat continues inspecting a mechanical arm she found, that Annie can't wrap her head around. Annie says, since Jones said every student had a special skill, perhaps mechanics is Kat's. Annie shivers, so Rey brings over her jacket. Kat notices something. "What's up with you two? You've been tiptoeing around each other for ages!" Kat then orders them to be friends again, and Annie sheepishly pats Rey on the head. The delivery robots come over and ask Kat if they can go to the basement, and Kat happily gives them directions. Robot has been spreading the word among the other Court robots of the portrait of Jeanne in the basement.

Anja arrives, and says hello. She's come to teach Annie more about her blinker stone. Lesson 1: You can never lose a blinker stone. Anja left hers in her jewellery box at home, and yet it appears in her hand. Kat thinks her mom just palmed it, so Anja hands Kat her stone and tells her to hold onto it very tightly. She then summons it to her hand again, to Kat's surprise. Now it's Annie's turn. Anja, holding Annie's blinker stone, asks her to picture it in her mind, then picture what's around it, then imagine herself holding it — and the stone appears in Annie's hand, and she drops it. Kat exclaims that it must be some kind of matter transference.

For the second test, Anja goes and hides Annie's blinker stone outside. As she reenters the workshop, ducking under the door, a necklace falls out of her shirt, with a pendant of an eye with a line through it, which she quickly tucks back under her shirt, but not fast enough for Annie and Rey not to notice it. This time, when Annie finds the stone with her mind, it's on the roof. She can see the entire area, with many colours coming from the forest. Anja tells her she's a natural, as most people can only focus on a very small area. Annie summons her stone again, and this time she catches it.

Kat asks if anyone can use the stone, and Anja says no. Some people can use them easily, and even develop their Psychic Powers to the point where they don't need it. For others, it is impossible. Jones can't use them, which is why she couldn't teach Annie herself. Mr. Donlan can't use them either. Annie asks Anja if she's a magician. Kat is flummoxed, and Anja is surprised. Annie says she's seen Anja do inexplicable things in the past, such as restraining Reynardine. And there's that pendant she's wearing. Anja suggests they talk in the office, and Annie leaves her blinker stone on a table in the main workshop before she follows.

Anja: Tell me, do you girls believe in magic?
Kat: Hah, of course n—
Annie: Yes.
Kat: What? Come on, magic is just something that hasn't been explained yet.
Anja: But what would you call something that can't be explained by scientific methods? Take the blinker stone. Under extensive analysis it appears as nothing more than a simple monocrystal, but it is clearly much more.
Kat: Okay, so there just isn't a process to explain how it works yet.
Anja: No scientific process, perhaps, but there are other methods of explanation. For a long time people thought alchemy was a valid methodology. Others may call these methods "magic". The Court, on the other hand prefers to define them as "etheric sciences".

Anja further explains, however, that her restraining of Reynardine wasn't "magic", but rather a computer program designed to prevent him from using his body-snatching powers. That's what the struck-out eye means. Anja and Donald designed it together. Anja built the computer, and the pendant is a link to it. It's intended to keep Renard in check. Kat states that she's never seen her mother using computers, and Anja explains that the computer is a specialized piece of information tucked away in a secure location. Donald is a sub-user on the system, which explained how he made the shield to protect Annie at the parley last summer. At this point, Kat and Anja go into a complicated technical discussion that Annie can't understand, so she goes into the ether. When she pokes Rey in the ether, he pops up to tell her that Anja forgot to mention that spying with a blinker stone is not recommended.

Annie summons her stone back to hand. Since the technobabble is over, she mentions that people have been using symbols to invoke or ward off spirits for a long time. Anja confirms that it's the same principle, and states that both Mr. Eglamore and Mr. Donlan have tattoos of the symbol that have protected them from Reynardine in the past. Kat is floored by this revelation, and even more so by the fact that Anja was the tattoo artist. Annie is surprised, given that Rey was granted his body-snatching ability by Coyote, that they found a way to manipulate it with technology. Anja responds that it's both yes and no. Her computer is based on work they did trying to find a way to control Reynardine. However, just as with blinker stones there's a lot they don't understand.

Anja: Basically, we cheated. The computer is a hybrid of Court technology and just enough etheric technology to allow it to work. Because of this, though, the Court sees it as a useless system.
Kat: That's not fair... I mean, it works, right?
Anja: Some say that isn't good enough. Not if you can't fully explain how it works.

Anja asks which boy gave Annie her blinker stone. Annie says it was Mort, and asks how Anja knew it was a boy. Anja explains that blinker stones are traditionally given between couples. Donald gave her hers a long time ago. Kat laughs, and Anja asks Annie if she wants to see a few more tricks.

After Anja leaves, Annie and Kat go see Mort. To both Kat and Mort's surprise, Annie is furious about the gift of the blinker stone, thinking that Mort was trying to stake some sort of "claim" on her, and yells that he can have it back, slamming it on the table and storming out of the room. Kat follows Annie to give her a piece of her mind, telling her that she's being ungrateful, especially since Mort likes her. Annie retorts that Mort isn't a boy, he's just a ghost. Mort comes out and informs Annie that the gift of the blinker stone wasn't his idea, it was Muut's. He didn't even know what it was, and since the Guides aren't allowed to interfere in the living world, it had to be someone else's idea. Annie asks why a blinker stone, and Mort says he wouldn't know, since he's just a ghost, and disappears. Annie tries to find him to apologize, but he's nowhere.

Time to summon a Guide, then. Annie and Kat capture an ant, and Annie kills it to summon the insect Guide, Ketrak. She apologizes for bothering him, and asks him to get Muut. Muut, upon appearing, scolds Annie for wasting a life like that, but she points out that she doesn't know any other way of summoning him. She also asks him to make himself visible to Kat, as there's no need to be rude. Annie asks Muut why the Guides wanted Mort to give her the blinker stone. Muut explains that they need her help because of the woman on the banks of the Annan Waters. The Guides have no power to help her move on, and they don't even know who she is. Annie does, though. "Jeanne." Annie asks why they didn't just ask her for help, and Muut asks in return:

"Would you have agreed, had the request come from us?"

They arranged to give her a blinker stone because it helps her extend her reach into the ether, so she can be an anchor for Jeanne. Kat has one last question, though: Why is Annie so angry with the Guides? Annie tells Muut to tell Kat.

Kat gives Muut a Death Glare, hits him in the stomach and walks off. Anne thanks Kat, and Kat says it was no problem. Annie has a tiny favour to ask of Muut, however, and it's not interfering in the living realm. She holds up an envelope.

Elsewhere, Mort is terrified by the sudden appearance of a crowd of demons chanting "WE ARE HERE TO DESTROY YOU!!" One of them then explains that it's just a joke, and they're actually here to make a delivery, and he hands Mort an envelope. Mort pulls out a card with a heart on it, and opens it to read an apology from Annie for earlier. Mort, upon finding out that Annie sent the demons, cracks up laughing.