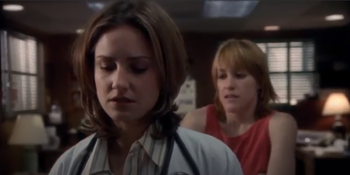 What happened to the $500 I gave you?
Advertisement:

Mark is lying in bed with Jen when his hospital pager goes off. Rousing himself out of bed, he answers the pager and calls County... only to find out that he's being called back in to work by Carol, as a heat wave has played havoc throughout the city, causing a neighbouring hospital to lose power and the nearby Mercy hospital to lose the power in its trauma ward. Upon arriving at County with Rachel in tow, as Jen is looking for an apartment in Milwaukee, Mark and Doug diagnose a five year-old girl with heart problems while Lydia brings Rachel to the hospital's staff lounge.

As Haleh tells Mark about the humid conditions plaguing the hospital (and the city), a pizza deliveryman phones the hospital to tell them he's been stabbed by a customer and is driving himself to the ER. Mark barely has time to ask how the patient's condition is before the deliveryman drives the vehicle straight through the receiving doors, causing Mark to jump out of the way and the hallway and lighting fixtures to be damaged. Having seen what's happened, Dr. Taglieri pops out of a nearby hallway to ask if someone ordered a pizza.

The pizza deliveryman is wheeled into one of the exam rooms to diagnose his injuries, but despite his apparent cries of pain, Benton discovers that his injury is Just a Flesh Wound, and tells Nurse Chuny and the others to give the man a bandaid and send him on his way. Meanwhile, Mark contends with a DOA that was left in the hallway because there is no space in the morgue, and Doug continues to diagnose the five year-old girl, Kanesha, who looks on in surprise and fear as the doctors circle around her and examine her condition.

Meanwhile, Susan is told that her sister, Chloe, has arrived at the ER and wants to see her. Susan arrives at the doctor's lounge to find Chloe, who has stolen donuts from the lounge's fridge and annoys Susan for the way she dresses. After Susan asks her what she wants, Chloe tells her that she was thrown out from her apartment, even though the former made a $500 deposit on the property. Chloe asks to stay with her for a few days, and after several moments of begging and pleading, Susan reluctantly gives her the keys and tells her to be on her best behavior. Chloe tells her that things will be okay, and Susan reluctantly hopes that it will...

Mark questions Kanesha's father, Mr. Freeman, later in the day and tells him that the staff is doing everything they can to help her, while his other daughter acts dismissive and distracted regarding the situation. Later, Doug realizes that the situation is worsening, as Kanesha has become hypertensive and isn't responding to treatment. Mark muses aloud as to whether Kanesha has been poisoned, but after a tox-screen report, the two doctors and a representative from Child Protective Services go to Mr. Freeman and tell him that Kanesha overdosed on cocaine. He is taken aback by the revelation, but states he would never allow drugs in the house.

Benton is also on his shift when Lydia tells him that Ivan, the liquor store owner, shot and gravely wounded the robber who wounded him several months back. Benton finds Ivan holding his head and walking behind the robber, who has several gunshot wounds. Ivan tells Benton that he got revenge for the shooting by taking out the assailant first. As Benton and Carter work on stabilizing the patient, a 14 year-old boy, Dr. Langworthy arrives and attempts to seize control of the unit by ordering Lydia to crack open the patient's chest, just before Benton shuts her down. He orders Carter to look after Ivan's superficial wounds while continuing to stabilize the boy. Outside, Ivan attempts to justify his actions as Carter sews up the headwound the former sustained.

Mark also brings Rachel into the exam room to meet Kanesha, who is still recovering from her wounds. They have a conversation about each other's families before Rachel walks to the nearby OR and sees Benton and Langworthy preparing to crack the boy's chest to remove the bullets from inside. Seeing what she's doing, Mark pulls Rachel away from the room before anything else happens and tells her that the staff are trying to help the "sick boy" better. Soon after, Benton and the rest of the trauma unit wheel the boy to the intensive care unit, Ivan looks on in shock as the realization of what he did sets in. He eventually breaks down crying after Benton tells him that he's not sure if the boy will fully recover. Later, Langworthy admits to Benton that the boy died, and they are forced to break the news gently to Rachel after she asks about his condition.

In the nearby hallway, Doug stops Carol near the elevator and mentions that he wanted to apologize for his actions at her apartment a few weeks back, when he encountered both her and Tag. He tries to make amends with her, but she tells him it isn't the time. The conversation is interrupted when Tag arrives on the elevator, and Carol leaves both of them alone to take the stairs up to a nearby lab to get some test results. Despite their prior encounter, Tag says he doesn't blame Doug for wanting to get back with Carol, as he would have done the exact same thing in his shoes, before exiting the elevator. Later, as Tag and Carol look after a patient who has dislocated his shoulder and been sedated, Tag says Doug is still in love with her, but she brushes off his concern, claiming he "always wants what he can't have." Tag also wants to move in together with her, but she expresses reluctance at the offer and says she needs to move at her own pace...

Susan heads back to her locker, only to discover that Chloe broke the lock and stole one of her credit cards. Upon discussing the situation with Cvetic afterwards, Susan expresses reluctance to cancel the card, claiming she doesn't want to see Chloe get arrested... while also claiming that Chloe made her life hectic due to overstaying her welcome the last time she stayed at the latter's apartment. Despite reaching out to Cvetic for help, he refuses, claiming that Chloe is her responsibility and he has too many patients to attend to.

Doug continues to blame Mr. Freeman for Kanesha's condition, leading Nurse Connie to confront Doug later and accuse him of having a racial bias in the case. She suggests Taking a Third Option — having the entire Freeman family screened for drug use. Upon receiving the results, Doug discovers that while Mr. Freeman's test is clean, his older daughter's was not. Mr. Freeman says he's not surprised by the result, and that the death of Mrs. Freeman several months earlier caused his older daughter to self-harm due to the guilt over the incident. Doug promises to help them before he leaves.

In the receiving area, a detective questions Ivan over the shooting, and it's revealed that, despite Ivan's claim that the teenage robber shot at him twice, he was unarmed and Ivan chased him out onto the street before shooting him. However, the cop declines to press charges and leaves, while Ivan learns of the boy's death and reels in shock before heading out of the hospital...

Later that night, as Mark puts Rachel to bed and they talk about what she learned at the hospital, Susan comes back to her apartment and discovers that Chloe has left the place in disarray, along with stealing her television. Susan has a momentary breakdown before Cvetic arrives and sees the state of the apartment. He promises to get Chloe some help before they embrace...