Into That Good Night 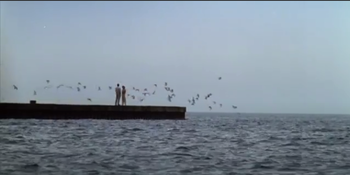 I've made too many compromises, Mark.

Doug and Carter are resting in the hospital's lounge late one afternoon when Carol rouses them from their sleep, telling them it's too early in the day to be sleeping on the job.

In the main receiving area, Mark is busy having an argument with Jen about why she can't give him some news over the phone when Doug arrives and tells Jen that Mark will be there to hear the news himself. As Doug takes charge over the wing, Haveh tells him that two critical patients are arriving from a head-on car accident — one a pregnant mother, the other a gangbanger who caused the accident. The mother is wheeled into one of the rooms and, after an examination, doesn't appear to have any serious injuries — though things soon take a turn when the staff realize she may be going into premature labor several weeks early.

Mark meets with Jen at a nearby boardwalk and she delivers the news she received — a job offer for a position as a legal clerk, in Milwaukee. Mark realizes that this means if she takes the job, she'll either have to take transit for several hours per day to reach the office, or the family will have to uproot from Chicago and move to Milwaukee. Mark congratulates her on the offer, but expresses concern that the opportunity he was given at Cook County (as chief resident) won't be present if the family moves from the city. Mark and Jen are left at a loss as to their next step...

The pregnant mother's water breaks and Doug realizes that she's going into labor, leading him to call the hospital's Neonatal unit to inform them that a premature baby is on the way. As they wheel the mother out, Mark arrives back at the ER and tells Susan about Jen's job offer, while Carter watches as Benton questions the female gangbanger about her actions prior to the accident. Benton orders a drug screen for the gangbanger after she tells him she wasn't taking drugs.

A short time later, Doug arrives back in the waiting area and tells Carol that the mother delivered in the elevator, and that the baby is currently being monitored in Neonatal. Afterwards, Carter approaches him and asks how he would administer a sexual disease test on a patient who has a burning sensation when urinating. After showing how the procedure is done, Doug asks who the "lucky girl" was, and Carter tells him it's Liz, the patient he met several weeks earlier. Doug tells him to be more careful next time while Carter becomes morose.

Susan is having an argument with her mother over an unknown topic when a patient suffering from an apparent heart attack is wheeled in, diverting her attention. The patient, who identifies himself as Samuel, appears to need a heart transplant, and briefly flatlines before the staff are able to resuscitate him. Despite this apparent danger, and the knowledge that this has happened multiple times before, Samuel is otherwise happy with the situation. He asks for the staff to call his family. Outside, Mark runs Samuel's test results by Benton, who suggests calling Dr. Kayson in the Cardiology Unit. Afterwards, Kayson reveals an ultrasound on Samuel's chest, while Samuel talks to Mark and suggest that no matter how busy his job may busy, he should always find time to spend with his family. Susan also attempts to suggest a course of action with regards to Samuel's treatment, but runs into friction with Kayson after he contends the stress would kill Samuel in less than two hours.

As Mark's shift ends, he stays around in the hospital lounge, telling Doug and Carter (who are both still on rotation) that he's never had a heart patient case last as long as Samuel's. After Doug leaves to treat an elderly patient who needs an x-ray, Carter tells Mark that he heard about the latter's wife's job opportunity, and asks him if he's going to stay at County. Mark replies that he doesn't know, and is still mulling his options.

Outside at the ambulance bay, Susan is talking to Cvetic about Dr. Kayson's cold treatment of her during Samuel's assessment. When he tells her that she shouldn't worry about what he says, she counters that he's on the hospital's review board and that if she wanted to make a recommendation on Samuel's case, she would need his recommendation anyway. Cvetic tells her that she shouldn't let it get to her before heading back inside.

Mark goes back to Samuel and tells him that, despite the hospital's best efforts, it is incredibly unlikely that they will get a donor in time, and that he won't last the night. He also tells Samuel that his family is on their way to the hospital to see him. He also asks Mark to call him Sam, and imparts some advice to make the most of the moments he gets with his family instead of work, as might not get the chance to choose both in the future.

While Susan and Carter intubate a patient who is unresponsive after drinking and possibly taking drugs, Sam's wife and children arrive at the ER, and Mark breaks the bad news to them. Despite Mark's best efforts calling different hospitals, he is unable to get a heart and tells Sam's family that they should spend their last hours with him. As he mulls things over during a break in his shift, he muses aloud to Susan about the only work he could find in Milwaukee being that of a junior resident at a smaller hospital, causing her to react in surprise and disbelief.

While Doug deals with a mother who doesn't have the money to pay for asthma medication for her daughter (prompting him to raid a nearby dispensary to get the medicine himself), Carter gets the results back from his sexual disease test... and expresses relief that the results were negative. His attention is immediately distracted when he sees... Liz, who is back at the ER complaining about an upset stomach. Dr. Kayson is standing beside her and looking on seductively, and she charms him before they start walking to his office, though not before she sees Carter and acknowledges him.

Samuel's family is brought in to see him, and he's able to spend a few minutes talking with them about his hopes for them before his heart finally gives out. As he lays dying, he asks his wife to tell his daughter often about how much he loves her...

The next morning, Mark is outside playing basketball when Doug arrives and tells him he should go back home to his wife, reasoning that the situation over his uncertain future will sort itself out. When Mark arrives home, he admits to Jen (who's just waking up) that he's ready to commit to go to Milwaukee. Jen tells him not to worry about it, and that the transit each day is much less than she thought. Rachel arrives at the bedroom and greets her parents, and the trio hug in the bed as Mark tells them everything is alright...