"Face-down with another man beating your ass. Is it Wednesday already, Zarbon?"
—Vegeta 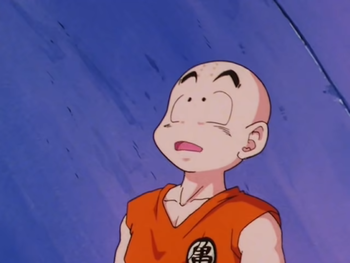 For Krillin, it's all downhill from here. Like Yamcha.note I do not know what this Yamcha is, but it sounds disappointing.

Goku's trip to space is going swimmingly, while Vegeta finds and pillages a Namekian Village. Krillin and Dende reach Guru's, and Zarbon gives Vegeta a beating.