After defeating the Red Ribbon Army, Goku goes to help his Indian friend, Upa, revive his father who was killed by Tao Pai Pai. They only need one more Dragon Ball to do so but the radar can't pick it up. Roshi suggests to go visit his sister, Fortuneteller Baba, to locate it through her crystal ball. However, she requires payment in the form of either an enormous fee or by defeating her warriors. Naturally, the group have to take the latter option.

Collapse to Read
Having trounced the Red Ribbon Army and collected their Dragon Balls, Goku only has one more to find so he can wish the dead Bora back to life. One problem; the Dragon Radar is unable to pick up the seventh. While leaving the Army HQ, he meets up with his friends, who are stunned to learn that Goku single-handedly took down terrorists even the formal military couldn't beat. After learning of his new quest, Bulma takes a look at the Radar and determines that the device is not broken. The last Ball's energy signal must be blocked by something. Roshi suggests that Goku go see the Fortuneteller Baba, a fortuneteller who can divine anything. Krillin, Yamcha, and Puar tag along on the adventure, and after a quick stop to pick up Upa, Bora's son, they head to Baba's palace. There, they learn that Baba charges an outrageous sum for her services. However, she has an alternative; if Goku's team can defeat her champions in a survivor tournament, she will locate the Dragon Ball for free. The heroes agree, confident, but so is Baba...

The first battle is between Krillin and a kick-boxing vampire, Draculaman. By turning into a bat to dodge and with sucking Krillin's blood, Draculaman wins the first bout easily.

With Draculaman's permission, Upa and Puar are allowed to fight together since they are so small. However, this next fight goes against Draculaman's favor, as Upa and Puar beat him by relying on the weaknesses of vampires; Upa has eaten garlic and holds arms out to mimic a crucifix, and Puar's shapeshifting into a hedgehog protects the cat from being bitten. When Draculaman tries to turn into a bat to escape, Puar morphs into a hand and slaps the vampire out of bounds.

Yamcha takes over for Upa and Puar for the next match, but his opponent isn't coming. Or has he? The next fighter is the Invisible Man (or as he's called here, See-Through)! Yamcha finds himself quickly being battered around by a foe he can't see, and even trying to listening for See-Through's movements isn't working- Baba sings loudly to stop that tactic. Getting an idea, Krillin has Goku fly off and bring back Roshi and Bulma back. The monk then pulls down Bulma's top, and the sight of her exposed breasts causes Roshi to have a massive nosebleed. The blood hits the Invisible Man, exposing him and allowing Yamcha to win.

We learn that Master Roshi and Baba are siblings, and Baba moves the contest to a new location; a narrow bridge suspended over a pool of acid, ominously dubbed The Devil's Cesspool.

The next champion is Bandages the Mummy, a hulking man wrapped in bandages. While Yamcha hopes to use his supposed superior speed to win, the Mummy is just as fast as he is strong. Yamcha is overwhelmed and forced to surrender.

Goku eagerly jumps in, and takes Bandages down in one shot, much to everyone's shock.

Baba's penultimate champion is Spike the Devilman, a two-time winner of the World Tournament. However, he too cannot defeat Goku. Even his ultimate move, a beam that causes people to self-destruct from their own inner evil, fails because Goku is too pure-hearted.

The last warrior is...an old fellow in Chinese clothing, his face hidden behind a bunny mask. The Masked Fighter asks that the last match be fought in the original arena. While no one is impressed by the Masked Fighter's appearence, Goku can't help but feel comforted by his enemy for some reason...

Watching via spy satellite are none other than Pilaf, the wannabe emperor Goku encountered on the first Dragon Ball hunt, and his two sidekicks. Pilaf has the last Dragon Ball, keeping it secured in a lead-lined container. He has been spying on Goku, hoping to find a chance to take the other Balls. Now that he knows about Goku's weakness, Pilaf figures that it's time to take his revenge...and the wish for world domination!

Back at Baba's palace, Roshi figures out how the Masked Fighter discovered Goku's weakness. This powerful warrior already knew about it, because it must be Gohan, Goku's supposedly dead grandfather! Meanwhile, the Masked Fighter accidentally tears off Goku's tail. With Goku's weakness a none-factor, the Masked Fighter gives up. However, he chides Goku for not trying to overcome the weak point, and reveals that he is indeed Gohan. A tearful reunion ensues, but only temporarily. Baba can bring fighters from the afterlife back to Earth for a single day, and set up the entire tournament so Goku and Gohan can meet up. Gohan had been worried about his charge, but now knowing that he's made new friends, he can pass on peacefully. Baba determines the location of the last Dragon Ball, and Goku eagerly flies off on the Flying Nimbus.

The fight against Pilaf goes by as easily as you'd think. Pilaf's gang try to grab Goku's tail, but unfortunately for them, he doesn't have it anymore. Goku takes the last Dragon Ball, and then takes Upa back to Korin's Sacred Land and has the Dragon God revive Bora. Before the Dragon Balls fly off however, Goku grabs the Four-Star Ball. Now he'll never have to go looking for it again! Back at Baba's, the rest of the Dragon Ball gang are in awe of Goku, and Baba reveals that she's foreseen that Goku is destined to save the world someday...

Goku returns to his friends and reveals that he managed to keep the Four-Star Ball. His next goal? Train for the World Tournament! While Yamcha will be training alongside Krillin as a new student in the Turtle School, Roshi tells Goku that he should Walk the Earth and be Taught by Experience, as his own adventures have made him too strong for the Turtle School teachings. And furthermore, he has to do it without the Flying Nimbus! (After all, it's not exertion if you've got a cloud carrying you everywhere...) Goku heads off and his own and the gang disperses.

What kind of challenges await Goku at the 22nd World Tournament? Find out next time, on Dragon Ball!

Baba Arc has the following tropes 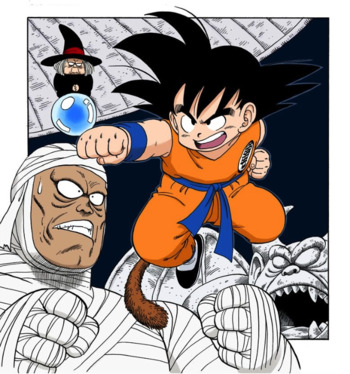