Manga / Encouragement of Climb
aka: Yama No Susume 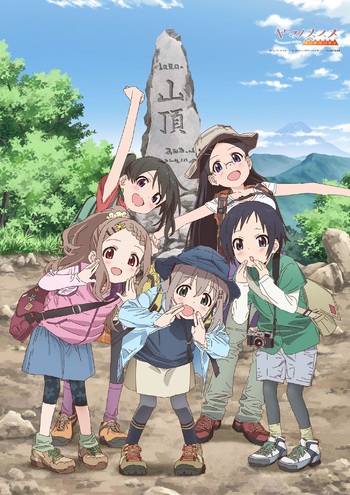 From left to right, back to front: Hinata, Kaede, Kokona, Aoi and Honoka.
"It may have been hard, but it was a lot of fun. I want to experience more of these feelings."
–Aoi Nakamura

When Aoi Nakamura enters high school, she envisions herself participating in a variety of indoors activities such as knitting; having been injured from falling off a jungle gym some years previously, Aoi developed acrophobia and shies away from outdoors activities. However, on the first day of school, Aoi is reunited with her childhood friend, Hinata Kuraue, who persuades Aoi to accompany her on her mountain-climbing excursions. While Aoi is initially reluctant to participate, Hinata's insistence prompts Aoi to follow her on a short hike up a local hill, where she rediscovers the joys of mountain-climbing and recalls that as children, she'd seen a sunrise from the summit of a mountain and had promised to do so again with Hinata. Besides familiarising themselves with a range of skills and acquiring the necessary equipment for climbing mountains, Hinata and Aoi also encounter new friends in Kaede Saitou and Kokona Aoba on their journey. Together, they set out to explore and conquer the mountains of Japan, with the goal of one day fulfilling their promise to one another.

Yama no Susume (ヤマノススメ, Encouragement of Climb) is a slice-of-life manga written and illustrated by Shiro. It was serialised in Earth Star Entertainment's Comic Earth Star magazine in 2011 and received an anime adaptation during the Winter 2013 Anime season, portraying Aoi and Hinata's reunion, their first excursions and meetings with Kaede and Kokona in three minute long episodes. A second season aired during the Summer 2014 Anime, consisting of twenty-four episodes that last fifteen minutes each, and during the summer of 2018, a third season aired. Owing to licensing issues, only the first and third seasons are available for watching on Crunchyroll. As of September 2019, a new anime project for Yama no Susume was announced during an autumn festival.

Yama no Susume provides examples of: