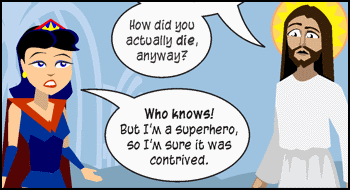 Sometimes, when a character is Killed Off for Real in a universe where Death Is Dramatic, a lot of work is put into it. They may make a Heroic Sacrifice, or have A Death in the Limelight in their last appearance. If done well enough, it might even be their Dying Moment of Awesome. This trope applies when such things are generally expected, often because of previous dramatic deaths in the series, but don't happen. Note that when Anyone Can Die, this trope does not apply.

When done off-screen (like the Sorenson example), it's known as a Bus Crash. For the exact opposite, see There's No Kill like Overkill. See also Actor Leaves, Character Dies, The Character Died with Him, Surprisingly Sudden Death, Sudden Sequel Death Syndrome, Distracted from Death, Not So Invincible After All. If this is done to a character repeatedly with the aid of Negative Continuity, see They Killed Kenny Again. If you're looking for this trope on an expanded scale, see Rocks Fall, Everyone Dies.

Not to confuse with Dropped a Bridget on Him, the former trope name for Unsettling Gender-Reveal, or with dropping a literal drawbridge onto someone, though it may overlap with this trope.

Jet's character is unceremoniously removed from the play.

Jet's character is unceremoniously removed from the play.