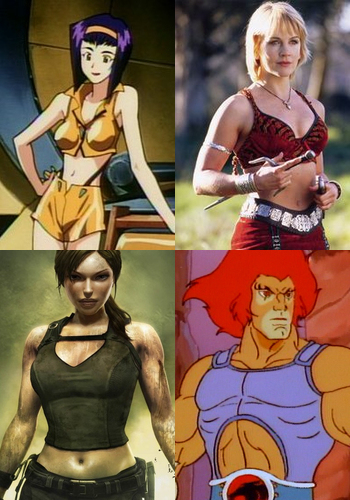 You don't have to be a philosopher to navel gaze.
L - R, top to bottom Faye Valentine, Gabrielle, Lara Croft, Lion-O
"Now a lot of you might be wondering, why didn't I put Belle on there? Well, it's not that she wasn't beautiful, smart, and a well-developed character. It's just that, well... she didn't show her navel, and on this countdown that earns you, like, 20 more points."
— The Nostalgia Critic, Top 11 Hottest Animated Women

(referring to why just Jasmine and Ariel were second)
Advertisement:

Midriff-baring outfits are popular in Real Life, and have been for centuries, although for a while, it was just in certain cultures and, within those cultures, certain occasions. It's more like 60 years that it's been widely considered acceptable. Even belly-dancing outfits weren't midriff-baring before the "cabaret style" began with the most famous "Little Egypt,"

◊ a belly dancer who performed at the Chicago World's Fair in 1893.

But since then, they've been a hit, with outfits ranging from tube tops to two-piece bikinis. (Also commonly called a crop top, cropped top, belly shirt, half shirt, midriff shirt, midriff halter top, tummy top, short shirt, or cutoff shirt; also sometime seen with some halter tops, and dozens of non-American styles.) So this is a trope about costumes showing the curvy area around a woman's waist.

Note that simply showing the stomach and a little skin around it, like a slightly open shirt, does not count. But a dress with a large section around the belly cut out does. Nor do completely naked characters count — although their midriff is bare, so is the rest of their body.

Starting in the late 90s and into the 2000s, the belly shirt seems to have become some kind of visual shorthand for "teenage girl" or, in some cases, just "girl". If someone does this in High School (actually in school), it's a case of No Dress Code.

This is mostly a female trope, most likely because hunky Mr. Fanservice can show off his entire torso without instantly getting the work slapped with an R rating, so he might as well just do that instead. A bare midriff on a male character is usually (though not always) a sign that he's Camp Gay and/or a Crossdresser, and a form of Fan Disservice, especially when ugly and/or old. It has become more common in stage outfits in anime male idol shows (particularly if the group is youthful and enegetic) though the female counterpart is still a lot more common.

This seems to be the only other form of Fanservice in Bollywood besides Wet Sari Scene, due to it being a traditional form of dress for young women.

Can come with a Minidress of Power, Chainmail Bikini, Lingerie Scene, Black Bra and Panties, Loincloth, Sexy Santa Dress, or Walking Swimsuit Scene as long as it is either a skimpy two-piece bikini or a topless monokini.

The Fat Slob sometimes employs this trope for Fan Disservice, always wearing a (typically food-stained) shirt that's a couple sizes too small to fully cover up his huge gut. This is most often seen in kids' cartoons.

Super-Trope to Fur Bikini and Seashell Bra. No Shirt, Long Jacket has a similar effect.

Compare Absolute Cleavage, Underboobs, Showgirl Skirt, Zettai Ryouiki (has a similar effect, but lower on the body), and Sexy Backless Outfit. Compare and contrast Navel Window, where the character's outfit only exposes their navel and a little bit of skin around it, and Navel Outline, where their clothing is tight enough to make the outline of their navel visible.

Not to Be Confused with Contemplate Our Navels, which means an act of deep philosophical thinking and has nothing to do with actual navels.