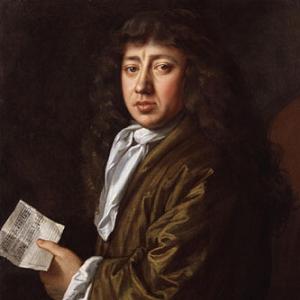 Samuel Pepys (pronounced 'peeps') was a 17th Century English civil servant who is famous for keeping a remarkably frank daily diary between 1 January 1660 and 31 May 1669. (This was perhaps not as dangerous as it sounds, as the diary was written in a form of short hand most people could not read, later mistaken for a deliberate code.) The diary is an exhaustive record of everything he thought noteworthy, from important historical events like the Great Fire of London, to the plays he watched, meals he ate, and other people's wives he slept with.

Pepys' diary for this day in history, preserved as a blog, is available here.

Tropes related to Pepys and his diary: