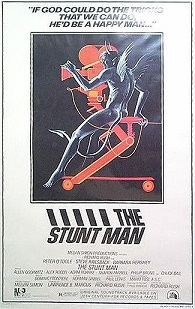 The Stunt Man is a 1980 Action-Comedy-Drama-Thriller-Romance film directed by Richard Rush, based on Paul Brodeur's novel. The story starts with a Vietnam veteran named Cameron (Steve Railsback) who is on the run from the police. He runs onto a movie set and accidentally kills the stunt man. Director Eli Cross (Peter O'Toole) offers to hide Cameron in exchange for him taking the stunt man's place. That, of course, is only the beginning.