Film / Beyond the Pyramids: Legend of the White Lion 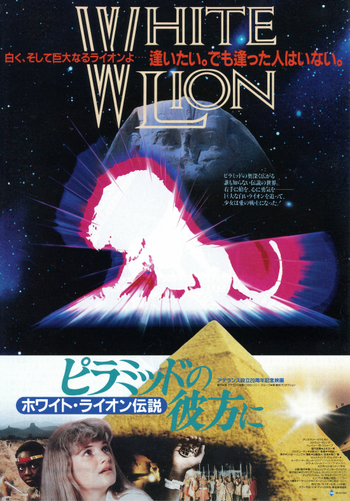 Yes, this is one image.
Debuting in 1988, Beyond the Pyramids: Legend of the White Lion (also known as White Lion, depending on which title screen one goes by) is an English-spoken children's film featuring American and African actors that was shot in Africa (Kenya, Tanzania & Egypt) and produced by the Japanese division with aid from the American branch of CBS Sony Group and Towa Productions. Production took two years and the end result only saw release in Japan.
Advertisement:

The story concerns Maria, a girl from New York City whose parents are divorced. She lives with her mother, Sara, who as a researcher often has to travel and brings her daughter along. The two have trouble matching their lives as Sara has to balance work and her new romance with her colleague, John, with giving Maria the attention she craves. Sara's and John's research into the White Lion takes them to Egypt, where a legend of one of the pyramids housing a door to a secret world catches Maria's imagination. When her mother fails to take her into the pyramids as "promised", Maria goes alone, getting directions from a mysterious, elderly tour guide, and ends up in a mirror world of the one she knows. In it, she awakens, unaware of her altered backstory, in the care of Raha, a local villager who takes care of her while Sara and John are away looking for the White Lion. They go missing, so Maria enlists the help of a local boy, Moja, who wishes to regain the respect for his warrior family's name after the disappearance of his father, and of a mysterious, elderly man, Tswana, the tour guide from her true world.

The film was loosely adapted into a video game for the NES, which unlike the film did receive a release in America in 1992 under the name Legend of the Ghost Lion.

Beyond the Pyramids: Legend of the White Lion contains examples of: