Film / Be With You 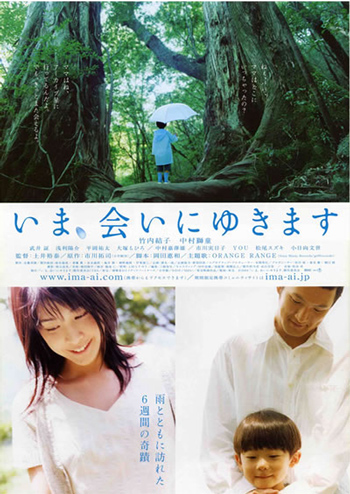 "Mommy will come back again when the rainy season ends, right?
"She promised."

Be With You — Ima, Ai ni Yukimasu (I'm coming right now, to be with you), is a 2004 Japanese drama film based on a Japanese novel of the same name written by Takuji Ichikawa. The film was directed by Nobuhiro Doi and it was adapted from the novel by Yoshikazu Okada. It stars actress Yūko Takeuchi as Mio Aio and actor Shido Nakamura as Takumi Aio.

Takumi Aio is a single parent raising his six-year old son, Yuji Aio, after his wife Mio Aio died. He seems to suffer anxiety attacks and fainting spells, which isn't helped by the fact that he believes his condition had an adverse effect on his wife's own happiness. While he grows depressed during his first year as a widowed father, Yuji holds on to his mother's final words, promising him that they'll meet again the year following her death.

On a walk in the forest outside their house, Takumi and Yuji find a woman sheltered from the rain, and immediately accept her as Mio. She has no memory or sense of identity; she comes home to live with the father and son anyway. This new Mio asks Taku how they met and fell in love, and he recounts a tale of years of missed chances, beginning in high school and ending when she encouraged their marriage years later. As the rainy season draws to a close, Yuji discovers the "time capsule" he hid with his mother before her death. Mio's diary is inside, and its version of the Mio-Taku romance holds the answers to the mystery.

The film is fairly popular in Japan and also enjoys a moderate following overseas. Fans of romantic dramas will certainly enjoy the movie as a whole, but the main draw is The Reveal that the film concludes with.

A trailer can be found here