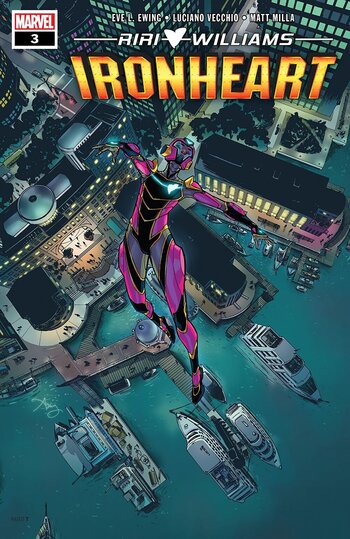 My stepdad. It's this thing he used to say all the time. "Those who move with courage make the path for those who live with fear." He said it constantly. He said my mother taught him that. And I just... I was tired of being afraid. I wanted to fly.
— Riri Williams, Ironheart #1
Advertisement:

Ironheart (or Riri Williams: Ironheart) is a 2018-2019 Marvel comic book. It was written by Eve Ewing, with art by Kevin Libranda, Luciano Vecchio, and Geoffo. It lasted twelve issues.

Riri Williams is having a bit of difficulty with her work-life balance: she's really good at fixing things and building things, but not so much with the whole "interacting with people" stuff, especially when MIT wants her to give potential investors a tour of her lab. Luckily, a hostage situation ensues so Riri can jet off as Ironheart in order to save the day.

The only problem is that the bad guys belong to a secret shadowy organization called the Ten Rings and they want to find something called the "Wellspring of Power" in order to gain, well, unlimited power. Riri will have to not only find out what they are planning, but also team up with other superheroes such as Spider-Man, The Unstoppable Wasp, Doctor Strange, and Shuri, in order to stop the Ten Rings.