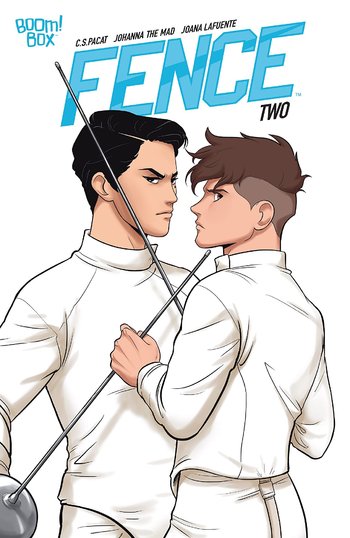 Fence is a comic book series by writer C.S. Pacat (author of the Captive Prince series) and artist Johanna the Mad, published by Boom! Studios under the "Boom! Box" brand.

The series is a Sports Story focused on the world of competitive fencing. There are two main characters, who are also rivals: Nicholas Cox, a Hot-Blooded young fencer and Seiji Katayama, a cool and collected fencing prodigy. They both attend the prestigious Kings Row, an all-boys boarding school where they both compete for a slot on the elite fencing team among a colorful cast of characters made up of spoiled rich kids, tough coaches, and flirty jocks.

The series borrows a lot of tropes from Sports Anime, complete with a pretty accurate depiction of fencing. It also has a heaping amount of Boys' Love content, with numerous gay characters along with the Homoerotic Subtext between the two main characters. Unsurprisingly, it quickly picked up a fanbase and after the initial 12 issues were released, the series was announced to be continued in OGN (original graphic novel) form, along with two written prose novels (titled Striking Distance and Disarmed) that were released in 2020 and 2021.

Not related to the play Fences, written by August Wilson in 1984, or its 2016 film adaptation.