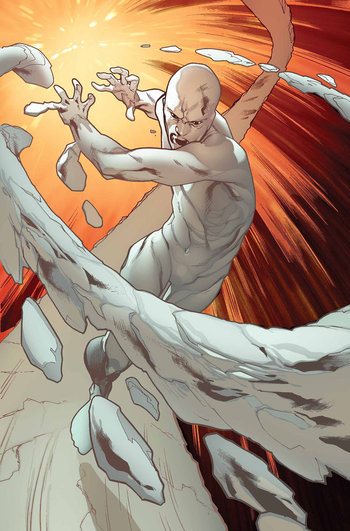 Don't be fooled by the scowl; he's a nice person.
My name is Bobby Drake. Iceman. I've been an X-Man, an X...Factor-ian, a Defender, a Champion (don't ask). I've been a super hero since before I was old enough to shave. I've stood side by side with the toughest, most powerful heroes in the known universe and always held my own. But today... today I need to be something more. So go ahead, call me a joke if you want. Label me the X-Man with the lamest power ever. But a man of untapped potential? Don't you dare ever call me that again!

As of the All-New, All-Different Marvel era, there are currently two Bobby Drakes populating the mainstream Marvel Universe: original Bobby, who's since grown into adulthood, and a time-displaced teenage Bobby, who (with his fellow original X-Men) was pulled from the 1960s into the present. Each serve on a distinct faction of the X-Men: adult Bobby with the Extraordinary X-Men, teenage Bobby with the All-New X-Men. Historically, he was also a member of The Defenders, the original X-Factor lineup, and the (much-maligned) Champions.

In the wake of Inhumans vs. X-Men (and its follow-up, Resurr Xion), the older Bobby will be getting his first ongoing series, with writer Sina Grace and artist Alessandro Vitti. The book concerns itself with Bobby trying to live up to the expectations of being an X-Men and Omega-level mutant, while also navigating being a newly-out gay man and trying to get the courage to tell his parents.

Iceman has appeared in: