The caretaker of the Duel Lodge and a personal friend of Yuma's grandmother, he lives all alone in the mountains with his pupil, Yamikawa. How he manages to survive so long is anyone's guess. Grandma Haru periodically sends supplies to him via her grandson, Yuma. He uses a lot of Yu-Gi-Oh! era cards such as the Poker Knights archetype as well as the classic Mirror Force.

The Demonic door that only appears in Yuma's dreams. It warns Yuma of future dangers and gives him new powers in order to fight them, but all this help has a price to pay... 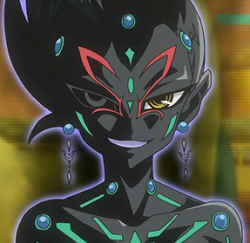 A physical manifestation of the card with the same name. Tries to get Astral to become evil as he claims that Astral wants the same thing all numbers want: destruction.

As of episode 101, he became the owner of Numner 65: Djinn Buster. In the following episode, he upgraded it into Number C65: King Overfiend, and he himself was Ranked-Up into Number C96: Dark Storm.

He was finally defeated in episode 111 but this came with a high price: In a last ditch attempt to take over Astral's body Black Mist turned himself into a spear-shaped object and stabbed Astral. Astral used his remaining strength to destroy Black Mist but this forced Astral to return to the Astral World as a result.

Actually a fragment of power from Don Thousand, which was why he was different from the other Numbers.