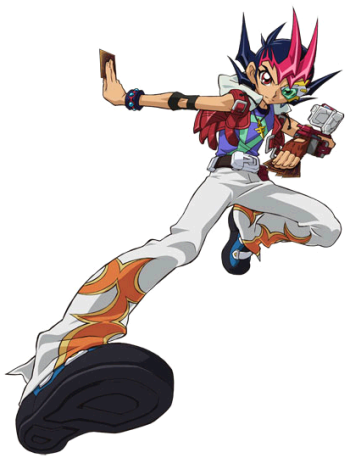 The protagonist of the series, Yuma is a thirteen-year-old middle-schooler living in the city of Heartland. Despite, or because of, his energetic, peppy personality he's known amongst his peers as a screw-up who can't do anything right, whether it be at school or at Duel Monsters.

He possesses a pendant called the Emperor's Key, which turns out to be the key to unlocking a gate to another dimension, releasing the spirit Astral and the ninety-nine Numbers cards. With his own Numbers ace, No. 39: King of Wishes, Hope (a.k.a. Number 39: Utopia), Yuma and Astral must track down and collect the remaining Numbers cards.

In the manga, Yuma gains the ability to summon Shining Numbers such as SNo. 39: Hope ONE, SNo. 39: Hope the Lightning, and SNo. 0: Hope Zexal 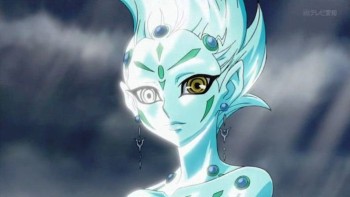 A spirit being from another dimension who meets Yuma after he unlocks a dimensional gate. With no memory of who he is, Astral and Yuma must collect the ninety-nine Numbers monsters to reconstruct his memory. While living with Yuma he tends to make observations regarding daily human life and possesses great insight into Duel Monsters. As only Yuma can see him, most others tend to think Yuma's going crazy whenever he bickers with him.

After regaining memories from several of the Legendary Numbers, he recalls his mission is to destroy the Barian World.

Known as the number one bully at Yuma's school, Shark is a duelist who once played at the national level, but was banned from the circuit due to looking at his opponent's deck before the championship match. Due to his skills, at first, he is arrogant and merciless to his opponents, defeating Tetsuo and taking his deck through the ante rule, and crushing Yuma's pendant, but upon being defeated by Yuma he shows that he does have some sense of honor by returning the deck without protest, and Yuma believes that one day they'll be friends.

During his first duel with Yuma his ace monster is No. 17: Leviathan Dragon, and afterward, he switches to Black Ray Lancer. After his duel with III he gains possession of No. 32: Marine Biting Dragon - Shark Drake. During his duel with IV, he is able to use Chaos Xyz Change, evolving Shark Drake into CNo. 32: Shark Drake Vice.

He had a previous human incarnation as the king of an island kingdom. An enemy king (Vector's past incarnation) attacked said kingdom and, after having his Gorgonic Guardians defeated, summoned a deity (No. 73: Abyss Splash the Roaring Waterfall Diety) to smite the kingdom for good. However, his friend, a knight riding a Pegasus (Durbe) arrived to assist, giving the princess (Rio) the opportunity to sacrifice herself to summon another deity (No. 94: Crystal Zero the Polar Ice Princess) to counter. After that, Shark furiously attacked Vector's army and pursued the mad king to his kingdom, where he met a girl named Iris who looked strangely similar to Rio.

Shark decided to fight King Vector on his own to minimize the losses, but Vector started a Shadow Game, which meant the more monsters of a certain player's were destroyed, the more losses their army would have. Shark won the duel, but all the monsters in his deck were sent to the graveyard, meaning, his entire army died. An unspecified amount of time later, he died and was reincarnated as Nasch, the leader of the Seven Barian Emperors, but was killed by Vector, who had also be reincarnated as a Barian and was reincarnated again into his present life. After Durbe shows him his past memories, he transforms back into Nasch.

In both the anime and manga, he plays a WATER Xyz-based deck, mostly revolving around Sharks. His anime deck involves quickly Xyz summoning and banishing his monsters.

In the manga he has No. 47: Nightmare Shark and No. 37: Hope-Weaving Dragon - Spider Shark. 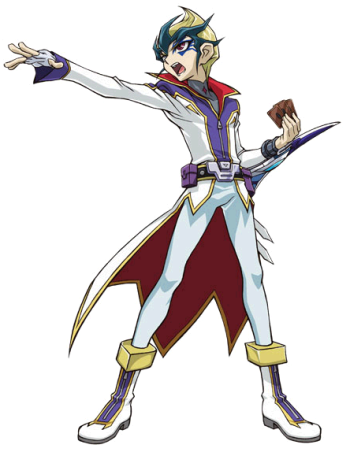 A 'Numbers Hunter', Kaito is hunting down and capturing Numbers monsters to try and help his brother, Haruto, who allegedly can only have his strange disease cured if all one-hundred Numbers are gathered.

His Deck theme is the 'Photon' cards, with his ace being Galaxy-Eyes Photon Dragon. In addition, he also possesses around fifteen Numbers, five of which are known: No. 10: White Knight Illuminator, No. 20: Gig-Anto Brilli-Ant, No. 30: Acid Golem of Destruction, No. 56: Goldrat, and No. 09: Sky Canopy Star - Dyson Sphere. As of episode 43, he now holds one of the strongest Xyz monsters in the game, Neo Galaxy-Eyes Photon Dragon. As of episode 64, he has lost all of his Numbers cards. He later gained a few more, though has apparently lost all of them as well, after his apparent death. 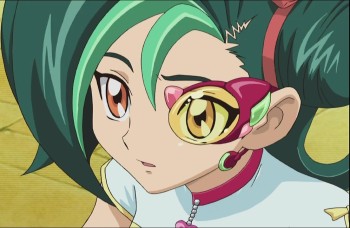 A friend of Yuma's. She's much more sensible and down-to-earth than he is, so as a result, she tends to have to constantly nanny him.

She doesn't duel as often but later uses a Fairy deck in the second season, with Fairy Cheer Girl as her ace monster.

Tropes exclusive to her in the first half:

Tropes exclusive to her in the second half:

Tropes exclusive to her in the manga: