Webcomic / See You in My 19th Life 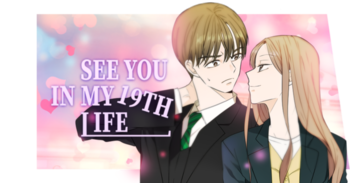 "I still remember you. Do you still remember me?"
"That's right, when I'm about to be reborn, as my life is ending, I always wish for the same thing: That my cycle of rebirth ends with this life, or that my memories don't come back when I'm reborn. But for the first time in ages, I find myself wishing for something else."
Advertisement:

When humans die, they will be reborn. Such is the cycle of life. However, Ji-eum Ban has a unique ability: A few years after she reincarnates, she regains her Past-Life Memories. In her 18th life, she was born as Ju-won Yun, the daughter of a wealthy Korean family. Thus, a bit tired of life, she decided to live a quiet and comfortable life.

When Ju-won was 12 years old, she met the 9-year-old Seo-ha Mun, a lonely boy living with his sick mother. Ju-won and Seo-ha became friends and over time fell in love with each other. However, on Seo-ha's 10th birthday, while on their way to a theme park, Ju-won and Seo-ha were involved in a car accident in which Ju-won died. With her dying words, Ju-won stated her wish to remember Seo-ha in her next life.

Immediately after, Ji-eum Ban, a poor girl in a dysfunctional family, was born. After regaining her memories, Ji-eum set out to use her talents to work for Seo-ha's family's company, waiting for the opportunity to meet Seo-ha again.

See You in My 19th Life (이번 생도 잘 부탁해, ibeon saengdo jal butaghae, Please take care of me in this life as well) is a romance webtoon by Lee Hey published by Naver since June 2020. Since December 2020, it is published in English on Naver's LINE Webtoons site.

A drama adaptation was announced in December 2021.