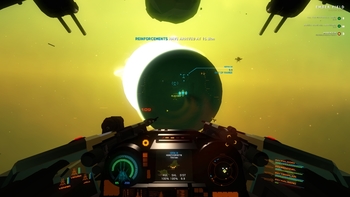 Hit and run tactics haven't looked this pretty before.
House of the Dying Sun (formerly Enemy Starfighter) is the first game of a new indie studio Marauder Interactive, and it was released on June 7th, 2016 for PC.

The emperor is dead, assassinated by his untrustworthy vassals. A usurper sits on the throne, and the player is left with the late emperor's last edict: Hunt the traitor lords and bring ruin to their people.