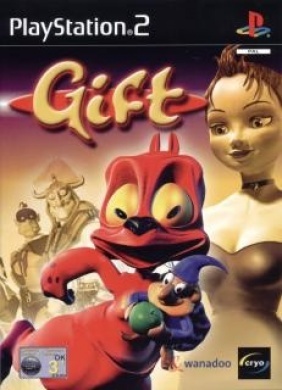 Men! I have some bad news for you. Our friend Muscular will not be returning! The Idiot has also failed. Do you know what this means?

Gift is a 3D platform game published in 2001 by Cryo Interactive and Wanadoo. It parodies and references popular films and video games.

It's about Gift, a little red sneaky creature with big yellow eyes who tends to rescue beautiful princess Lolita Globo, the task that other heroes, despite being brave and beefy, failed. Armed with the Magic Staff, he travels between different mad worlds of video games to find seven dwarves which will help him to save the princess from The Shadow of the Black Deep Dark Night.

The game is full of puzzles and logical tasks. It features indestructible enemies. Some of them die in light or darkness, and turning on/off lights will kill them, while the others can only be avoided. Meanwhile, there are enemies which can be killed by Gift's staff. Also Gift can charge his staff from magic crystals to get special abilities such as creating light/darkness, freezing or making gunpowder. These abilities require magic powder to perform. On some levels Gift can use a shadow gun, the weapon which hits enemies' or objects' shadows and freezes them.

Not to be confused with either G.I.F.T. or The Gift.