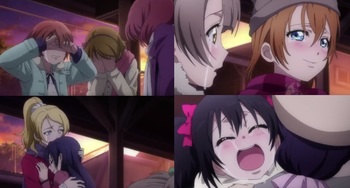 Everybody Cries in this scene, especially the audience.

Love Live! is a series about a group of girls trying to save their school from closing down by forming an idol group in hopes of attracting new students. Unfortunately, the road to that success is not easy, and there are many tear-ridden mishaps along the way.

WARNING: As a Moments page, all spoilers are unmarked. You Have Been Warned!