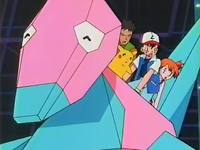 "Isn't this that cartoon that causes seizures?"

Ash and his friends bring Pikachu to the Pokémon Center, where Nurse Joy is experiencing problems with the Poké Ball transporter. Dr. Akihabara, the system's inventor, is pondering over the cause of the issue, but suddenly runs out of the building without an explanation. The kids follow him to his laboratory, where he explains that Team Rocket entered the computer network with a prototype of the digital Pokémon Porygon, and are now stealing the Pokémon being sent through the network. The use of an antivirus program would prove lethal, so our heroes are given a Porygon of their own and are sent inside the system to capture Team Rocket.

Inside the computer system, a battle starts between the two groups, and both Porygon show off their unique abilities. Ash, Misty, and Brock begin to fix the blockade that is preventing Poké Balls from properly transferring, while Team Rocket and the prototype Porygon are sent blasting off. Back in the real world, however, a computer technician is using an antivirus program, unaware of why this is such a bad idea. The program, represented by an ambulance filled with vaccination needles, targets the people and Pokémon inside the system. Everyone tries to escape, but a powerful attack from the program nearly destroys Team Rocket before Ash has his Bulbasaur intervene. The heroes' Porygon carries everybody towards the exit that will take them back to the real world, and Pikachu launches an attack at the program in order to protect the group.

Everyone makes it out of the network unharmed, but a last-minute antivirus attack on the exit has destroyed Dr. Akihabara's house. Team Rocket escapes without their Porygon, and Ash and his friends go back to the Pokémon Center before continuing on their travels. Nurse Joy confirms that the transporter system is working again, completely oblivious to the events that took place inside the computer.

Due to a flashing strobe effect used in one scene, nearly 700 viewers (primarily children) were taken to hospitals; a number of these people had experienced photosensitive epileptic seizures. More seizures occurred after news programs showed clips of the scene during reports on the event.

The reaction was swift and severe. The Pokémon anime was forced into a four-month hiatus, and this episode was never again broadcast in any part of the world. The episode was banned worldwide after airing just once in Japan. According to a post from Maddie Blaustein on Serebii.net, 4Kids Entertainment dubbed the episode, and toned down the flashing to make it safe, but were legally unable to air it. The strobe effect was a direct result of Pikachu's attack, but Porygon's starring role in the episode caused it to become associated with the incident. To this day, Porygon and its evolutionary relatives have never again appeared in the anime, outside of cameos in the fifteenth movie's opening sequence. (Although it was included in the American Pokérap.)