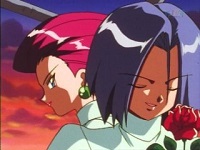 Meet the original bad guys. They're not as charming or clever as you would think from this image.
"A wanted poster. How flattering."
"Flattering? This picture makes me look terrible."
"Then you should be happy that the photographer captured the real you."
"Exactly."
"We'll show these bumpkins."
"The people of Viridian City will be sorry they ever saw this face."
"We're all sorry to see your face. Stay focused. We're here to capture rare and unusual Pokémon. Don't forget, Meowth."
Advertisement:
"Absolutely."
"But of course."
"And just remember, I'm the top cat."
"You got it."
"Meowth!"
— Team Rocket

Pikachu is still badly injured from his fight last episode, and Ash rushes him to the Pokémon Center at Viridian City. While Ash waits for Pikachu to recover under the care of Nurse Joy, Misty arrives at the center fuming over the loss of her bicycle. She is easily distracted, however, when Ash explains about how badly Pikachu was hurt.

Just then Team Rocket breaks into the Pokémon Center to steal the Pokémon recovering within. Ash and Misty attempt to fend them off while Nurse Joy transfers the Pokémon to Pewter City, but they are quickly overwhelmed.

Team Rocket is finally defeated through the joint efforts of Pikachu and several other Pikachu powered up by Ash spinning on Misty's bicycle to generate power. The powerful electric show ignites Koffing's poison gas and Team Rocket is blown away in the resulting explosion. Team Rocket is impressed with Pikachu's power and vow to capture it.

Misty follows Ash as he continues to his next destination, intent on hounding him until he can pay her back the cost of her bike.