Japanese Title: I Caught A Pokémon! 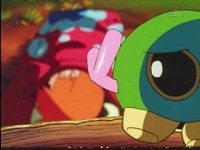 I just want her to like me, is that so much to ask?

Continuing from last episode, Ash immediately catches a Caterpie by throwing a Poké Ball at it. Once caught he takes it out to get a look at it and finds out that Misty is disgusted by Bug Pokémon. Despite this, Caterpie tries hard to win Misty over.

Later Ash finds a Pidgeotto and after some trial-and-error manages to capture it as well. Unfortunately Team Rocket show up to steal his Pikachu away from him. They disable Pikachu immediately and Ash struggles to fight both Koffing and Ekans at once. Despite being ridiculed by Team Rocket, Caterpie defeats them in the end. While being congratulated for his victory, Caterpie evolves into a Metapod.