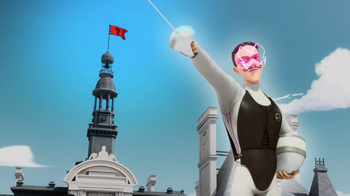 When the flag bearing the emblem of mine ancestors lies once again upon the roof of City Hall, then to thee I shall indeed be indebted!

Marinette runs against Chloé and Sabrina for Class President. Meanwhile, after losing an election, D'Argencourt gets akumatized into Darkblade and recruits the unwilling citizens of Paris into an army of knights.