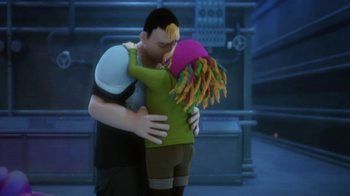 That final kiss wasn't quite what we thought it would be.

When Marinette's class makes a short horror film, the lead actress, Mylene, is akumatized into the Horrificator, a slimy monster that feeds off of fear.

Horrificator can spit a pink, quick-drying amber like solution.

Horrificator can spit a pink, quick-drying amber like solution.